One thing I really dislike is duplicate efforts!

I wanna do things once, well done and to last as long it should.

For instance, when I go to the market, I buy whatever I need for the next 2 days but not more then I would need for a week.  This way I can carry it all in a single trip, I have fresh products and don't need to get into market 3 times a day =D

Back to this post.  At my company we are ADDICTED to pull requests!  All work goes to review before it goes to production.  That has N+1 advantages that I won't explore on this post. Anyway we do it, a lot!

But then, we decided to use Sonar to point out obvious problems.
After we bought a shine new EC2 machine, we setup Sonar, set our CI to run reports once a day and then.... well, then nothing!

We kept falling into same issues sonar was supposed to help us to flush out.

But why?  The sonar report was there, to everyone to see!  Nobody saw it =/
But why?  Cause sonar was some other place people don't go!

If there was a way to make sonar report to be written at github, on our pull requests.

Googling lead me to nothing.
Was time to get my hands dirty.
And so it begun!

After 2 weekends working on it I was ready to show to my co-workers. 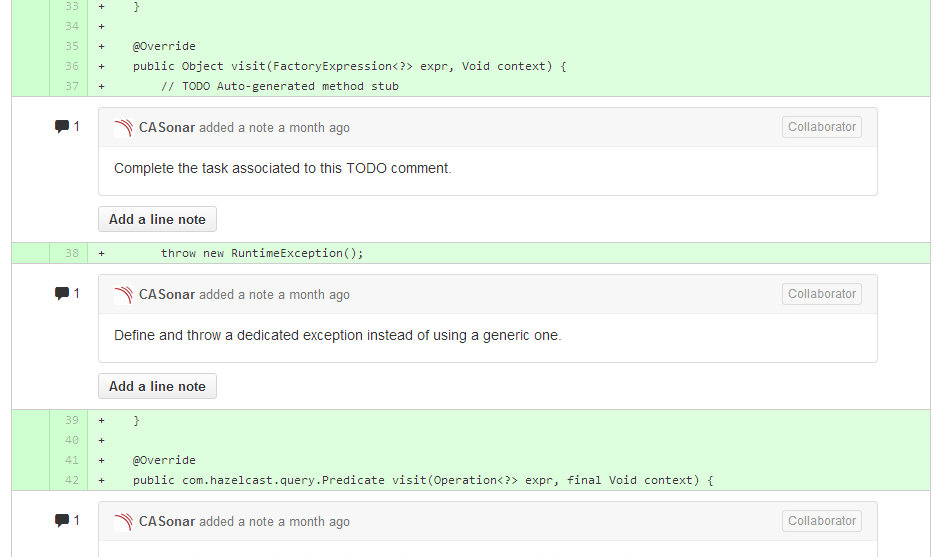 Everybody got really excited with this.  So I decided to try this on some really pull request we did on our every day work.  Well, was kinda failure, lots of bugs on my tool.  But after a few hours fixing then SUCCESS!!!

We now adopted this feature under the company organization and are maintaining it since.
https://github.com/ContaAzul/sonar-pull-request-integration

To execute this plugin use the following command:

Hope it is useful to others.
Posted by Unknown at 10:00 AM